My right knee started hurting a few weeks ago. I was walking upstairs to change after work, and I noticed an ache in the joint. Weird, I thought, as I continued upstairs. On level ground, I don’t feel pain. But going upstairs, it’s the same small stab in the same place.  This, in addition to the general ache I sometimes get in my left foot/ankle, from nagging tendonitis that I’ve been battling for six years.

My pants all seem to have shrunk, as well.  There’s something going on here…

At this point, you should be smirking. Ha ha, Dave, you know what’s happening.

I do. But I don’t want to admit it to myself.

When I was in high school, I weighed in at right around 250 pounds, but I carried it well. I have a big frame, broad shoulders. I wasn’t skinny, but I wasn’t fat. I was solid. Yeah, that’s the word. Solid.  And I was an athlete, so hours of practice and games kept me from putting on weight. That changed in college, where my eating worsened while my activity level significantly decreased.  Before too many years passed, I put on about 200 pounds.  I’ve been living in the 400’s ever since.

I’m about to turn 36. That means I’ve been obese (morbidly so, for most of that time) for about 15 years.

I had a few flirtations with weight loss. My best results were always with Weight Watchers–I lost the same 60 pounds twice, but always seemed to find it again (with some friends along for the ride) when I got tired of following the program.

When I got married, I was at my all-time heaviest. I think this was itself a gracious gift from God, something to assuage the years-long fear that no one would ever love me or desire me as a fat man. Yet, amazingly, my wife did and does.  I still marvel at this.

During our first two years of marriage, I lost 75 pounds. My wife challenged me to do random, bizarre things like juicing vegetables for a week or trying a ketogenic diet for a few months. In the end, however, we fell into some bad habits. Turns out, we like food. Rich foods, sweet foods, savory foods, delicious fried morsels of goodness. Tacos. Cake. Ice cream. Fried chicken. Pizza.  …what was I talking about?

Fast-forward to now. I have gained back around fifty of those lost pounds. I’m actually a stone’s throw from 500 pounds right now (if I haven’t crossed over already–it’s been a week or so since I’ve last checked).  And I’m about to turn 36.

The knee was the first reminder that time was passing.  The tightening of the waistband was the second.  The recently-discovered scattered grey hairs around my temples were another. Turns out, I’m starting to get older.

I heard about a pastor a week or two ago who died suddenly of a heart attack, leaving behind a wife and small children. I don’t know anything about his fitness level or lifestyle, but I do know his age. He was 35.

I adore my wife. I want to spend another 50 years being her husband. Realistically, if something doesn’t change, I can’t guarantee I’ll get 15 more years. When I really make myself consider that, I feel revulsion. There’s something deeply wrong with that notion.

I’ve written this post too many times over the years. I hope this is the last one, but I don’t know if it is. I want it to be the last one. In any case:

I want things to change. I want to be around to have kids, to see them grow up and start families of their own. I want to do church ministry for several decades. I want to write books. I want to be H.’s husband for 50 years.

So I’m jumping back on the Weight Watchers wagon, because I know it works for me when I commit to it and stick with it. Your prayers, support, and well wishes are welcome. If you want to share advice, that’s cool, but understand that I’m going to be following this program, so recommendations for other paths are appreciated but will be ignored. (Sorry.)

I’ll post updates from time to time (probably not as regularly as I have in the past), but once in a while, I’ll let you know. If you want to keep up with how I’m doing in real-ish time, follow me on Twitter. My meetings are on Saturday mornings, so I’ll likely post weigh-in updates then.

[And if you’re still reading at this point, thank you, especially. I appreciate every one of you.]

Here’s to my “after” pic looking like our boy Sullivan here. 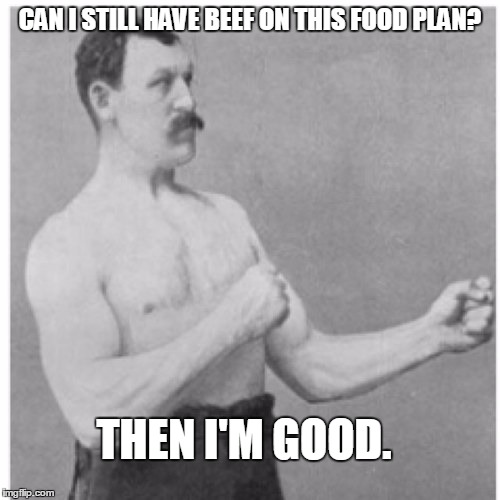 View all posts by Dave

The Most Important Thing
I Need to Tell You

My Words In Other Places

Want to buy me a coffee?
Follow The4thDave Blog on WordPress.com
Join 377 other subscribers