Mrs4thDave and I have been (re)watching the 6 Star Wars films in anticipation of Thursday night’s release of Episode VII: The Force Awakens. It had been years since I’ve seen some of these films (in the case of Episode III, I think I only ever saw it on opening night in the theater).

It’s easy to bust on the prequel trilogy. Over the last sixteen years, it has become matter-of-fact among some circles that the prequels were terrible, ruining the childhood memories of fans everywhere. (And that’s putting it extremely mildly, as the rhetoric in some dank corners of the internet is much worse–very much a wretched hive of scum and villainy). One only needs to mutter the word “midichlorians,” and almost ever Star Wars fan within earshot involuntarily sneers or shudders.

I confess that I’ve been one of these fans, jumping on the anti-prequel bandwagon. However, when your beloved wife suggests that you marathon the Star Wars films, you don’t say no.  And in rewatching the prequels, my opinions/thoughts about the prequels have evolved. Today, I’d like to share some stray observations. But first…

Let’s go ahead and address the first elephant in the room: Jar Jar Binks. So much fan angst has been directed at Jar Jar Binks, and sure, sure, we can understand that, right?

I mean, how bizarre and out of place is some weird creature with big ears who lives in mysterious water-based environment, acts in a childish way, and has a bizarre and awkward speech pattern? …Wait, sorry, were you thinking of Jar Jar Binks just now? I was talking about our first introduction of another character, in Episode V. 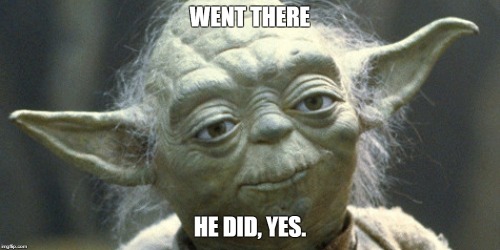 Am I equating Jar Jar Binks with Master Yoda? No. Am I saying that the angry fan reactions to a silly and harmless character are over-the-top, even for Star Wars fans? Yes. Yes, I am.  (Am I going to get death-threats some day for saying that? Yes, because the world is bonkers.)

Elephant, number 2: Midichlorians. Yes, it’s unnecessary. Yes, it takes some of the “magic” away from the mythos of The Force. But does it really matter beyond Phantom Menace? No. It’s never mentioned again. Move on.  Honestly, I’m more irritated by the fact Shmi Skywalker says that Anakin was immaculately conceived. 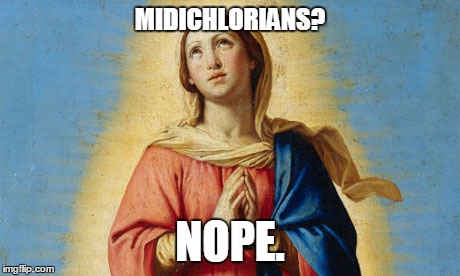 Okay, with those two issues out of the way, onto the hail of bullet-points:

I could list off several little details that somehow evaded me in previous viewings, but I’ll stop there.

So what’s my revised verdict on the prequels?  Honestly, they’re pretty good.

They aren’t perfect films, by any stretch, and they have moments of cheesiness and terrible dialogue. Of course, the classic trilogy falls into those traps as well. But I think the emotional arc of Anakin Skywalker and the Shakespearean tragedy of his downfall is still pretty compelling. The Phantom Menace gets more criticism than it deserves.  Attack of the Clones is actually the weakest film of the prequels, but it’s not without merit. And Revenge of the Sith is actually a pretty great film that gets overlooked when the three are lumped together.

So, if you’re in the mood, I would recommend rewatching the Star Wars prequels. In spite of their imperfections, they are a lot of fun and provide some surprising depth of character and feeling.

What do you think? Are the Prequel Trilogy secretly great? Obviously awful? Somewhere in between? What are the best moments or most frustrating elements of the films? Sound off in the comments below–but BE NICE. What do you think this is, Mos Eisley?

View all posts by Dave

The Most Important Thing
I Need to Tell You

My Words In Other Places

Want to buy me a coffee?
Follow The4thDave Blog on WordPress.com
Join 377 other subscribers